TADs or surgery for correcting AOBs: More or less stable?

The advent of TADs and 3D printing has heralded a new dawn in orthodontic mechanics. Many of these approaches are a little more involved. I have previously discussed the relative invasiveness of various treatment modalities in modern-day orthodontics. As is often the case, Peter Greco puts it better than anyone else. In one of his articles in the AJO-DO: ‘Before we initiate treatment, we must ask ourselves if the appliance is clinically effective, whether the risk-benefit ratio justifies our choice, and if less invasive intervention would equally meet our objectives’.

Undoubtedly, the predictable use of TADs has been a fantastic outlet. In particular, their use in avoiding more invasive or onerous treatment is a step change for the specialty. I can think of situations where TADs can produce better orthodontic outcomes with less long-term implications- avoiding the need for prosthetic replacement(s) in hypodontia being an obvious one. However, we increasingly owe it to our patients to ensure that we are proficient in using these mechanics.

But could TAD-based intrusion be as stable as a surgical intrusion of the posterior dentition in patients with anterior open bite?  If the answer is ‘yes,’ this might suggest significant ‘added value’ with TADs in the right patient.

The authors of this retrospective study aimed to address this possibility. The study was performed in South Korea and was published in Clinical Oral Investigations. 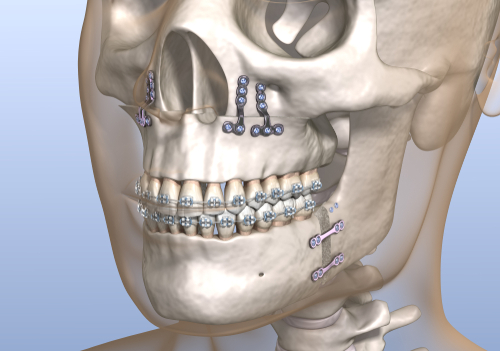 Posttreatment stability of an anterior open‑bite by molar intrusion compared with 2‑jaw surgery – a retrospective study.

The authors compared the posttreatment stability of anterior open bite (AOB) correction following either TAD-based molar intrusion or bimaxillary surgery. They did a retrospective follow-up study of 42 patients.

Skeletally-mature participants in the non-surgical group had AOB correction by the intrusion of the maxillary molars using miniscrews. They had no significant mandibular asymmetry. They matched this cohort of patients to subjects treated with bimaxillary surgery to address an anterior open bite.

The clinicians did the TAD-based molar intrusion with paired palatal and buccal TADs on each side (eight overall). They attached elastomeric traction to these. They did not use trans-palatal appliances.  The study team attempted to match the smaller (n= 21) sample of non-surgical cases with a subset from a larger cohort of surgical patients (n= 58). In the surgical group, the 2-jaw surgery involved a Le Fort I osteotomy with maxillary impaction and either sagittal split osteotomy or intraoral vertical ramus osteotomy.

They measured stability using cephalometric parameters only with radiographs taken pre-treatment, following molar intrusion (or surgery), at debond, and during retention. The mean period of posttreatment follow-up was approx. 34 months.

Both treatments successfully corrected the initial open bite (of 3.2 to 3.6mm), with the overbite increasing by 4.5 to 5.1mm with treatment. This change was primarily due to maxillary molar intrusion (of 3.3 mm). They saw a small amount of AOB correction relapse  before debonding (0.5 to 0.9mm) either following surgery or after TAD-based intrusion.

Overall, approx. ¾ (77-79%) of AOB correction was retained over the 34-month follow-up period with no significant difference in the magnitude of change between the groups. When they looked at posttreatment relapse. They found that the maxillary first molar moved 1mm and 0.4mm downward in the non-surgical and surgical groups, respectively, during the retention period. Perhaps surprisingly, a small amount of incisal extrusion (0.4mm) somewhat compensated for the molar extrusion in the TADs group.

I liked this study. There are issues with the methodology as this was essentially a convenience sample with an associated risk of selection bias. In particular, matching surgical and non-surgical cases is difficult. Indeed, we may be ‘comparing apples and oranges. Nevertheless, the participants did appear to be reasonably well-matched.

It is also likely that successful patients only were selected. Therefore, we cannot be sure how predictable both treatment approaches were in correcting the original malocclusion.

The results were interesting. I have always assumed that molar intrusion is relatively stable, with the forces from the posterior occlusion likely to reinforce the treatment-induced changes over time. However, this theory was not borne out in this study, with some molar extrusion observed in both groups. Furthermore, the incisors extruded by a small amount in the TADs group, compensating for the relapse in the molar region.

There are a range of different mechanisms for producing maxillary molar intrusion. The authors used a large number of screws but no palatal auxiliaries. With the advent of 3D printing, we may only be constrained by our imagination and ingenuity. There is, therefore, a myriad of ways of delivering more predictable intrusive forces to the posterior dentition. Therefore, this treatment approach will likely be used more and more over time. Nevertheless, it is reassuring to have some evidence that this approach may be as stable as surgical approaches.

Based on the present study’s limitations, there seems to be little to choose between TADs and orthognathic surgery regarding the stability of AOB closure. On this basis, I wonder whether a prospective study with random allocation of participants to surgical or non-surgical open bite correction could now be justified. While this may be the case, I would opt to have the TAD-based treatment every time. To paraphrase Peter Greco, ‘less invasive and equally meeting our objectives’.